Like every January 17th, this Sunday San Antonio Abad is celebrated. This saint is the patron of domestic animals as it is said that he defended and protected them throughout his life. For EDYPRO this date is really important since this festival is deeply rooted in Valencia and our technical director has actively participated as a speaker, for more than 15 years, in the blessing of animals that the ‘Hermandad de San Antonio Abad’ organized in Sagunto street. In addition, since 1988, he has collaborated in the organization of the same festival in his home town, Foios.

This year, due to the health crisis, the celebration has been canceled and the animal parade will take place virtually. From EDYPRO we want to join the festivity and make a humble tribute to domestic animals, analyzing the importance they have had, and still have, for agriculture.

The development and expansion of agriculture have been the key to human survival and have conditioned its evolution and dispersal. It seems that animals began to be used in agriculture in Mesopotamia and Egypt around 10,000 BC. This fact supposed an actual revolution, since it facilitated and expedited work in the field. “The energy contributed to the production process by domesticated animals (cattle, donkeys, camels and later mules and horses), which talking about pulling carts and plows can produce between 500 and 700 W of power instead of the 75 W of the human being, it constituted an advance only comparable to that obtained millennia later by fossil fuels” (Álvaro Martínez Álvarez, “La Agricultura: desde el Neolítico hasta la Robotización”).

The participation of animals in these tasks has results directly on food production. Thanks to the energy provided in sowing, plowing, hilling and weeding more and better can be produced. In addition, they also play a very prominent role in the transport of people, materials and crops and in other activities related to food processing, such as grain milling.

The industrial revolution and the introduction of agricultural machinery have been replacing animals from farm work. Even so, in less developed countries and societies they are still a key in agricultural work. From the FAO people point that “400 million animals are involved in supplying energy in agriculture through tillage and transport.”

It seems unthinkable that in the XXIst century there is this great dependence on the power of animals for agriculture development, but the truth is that it is a formula available to almost all societies that reaches where technology does not. In fact, in the current climate crisis context in which, in addition, a more rational use of resources and responsible agricultural management are needed, the use of animals seems a fairly efficient and accessible solution for sustainable organic farming. 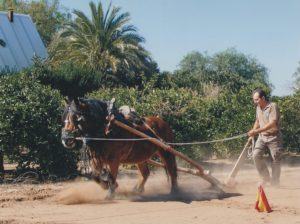